Back in April, I blogged about research published by Ryan Sorrell on the use of feedback-informed treatment in a telephonically-divered weight management program.  The study, which appeared in the journal Disease Management*, not only found that the program and feedback led to weight loss, but also significant improvements in distress, health eating behaviors (70%), exercise (65%), and presenteeism on the job (64%)–the latter being critical to employers who were paying for the service.

Despite these results, the post garnered no attention until four months later during the first week of August when three clinicians posted comments on the very same day–that’s the beauty of the web, a long memory and an even longer reach.

What can I say?  I’m having to eat my hat (or, the bird on my shoulder is…).  I learned a great deal from the feedback:

Solid points both.  Thankfully, one of the writers noted what was supposed to have been the main point of the post; namely, ” the importance of “practice-based” evidence” in guiding service delivery, “making clear that finding the ‘right’ or ‘evidence-based’ approach for obesity (or any problem for that matter) is less important than finding out “what works” for each person in need of help.”

I want to make sure readers have access to the results of the study because they are an impressive demonstration of what’s possible when the feedback is sought from and used to guide service to people “in care.”  Weight loss aside, Ryan also reported significant improvements in distress, healthy eating behaviors (70%), exercise (65%), and presenteeism on the job (64%).  All this by using two simple, 4-question scales.

PS: An AP article that came out this last weekend and was discussed on NPR suggests the truth about the “weight of the nation” may be more complicated than either I or those who commented on my blog may realize.  Among the many changes that have occured over the last decades, the piece declares, “Who are we?  Fatter.  The average woman has gained 18 pounds since 1990, to 160 pounds; the average man is up 16 pounds, to 196.”   Hmm. 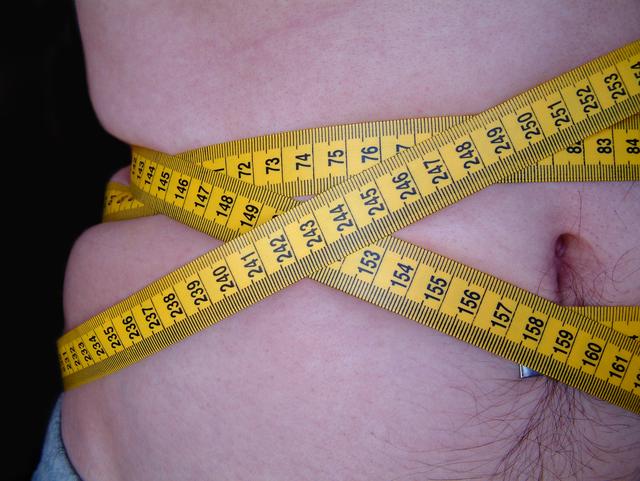 Obesity is a large and growing problem in the United States and elsewhere.  Data gathered by the National Center for Health Statistics indicate that 33% Americans are obese.  When overweight people are added to the mix, the figure climbs to a staggering 66%!   The problem is not likely to go away soon or on its own as the same figures apply to children.

Researchers estimate that weight problems are responsible for over 300,000 deaths annually and account for 12% of healthcare costs or 100 billion–that’s right, $100,000,000,000–in the United States alone.   The overweight and obese have higher incidences of arthritis, breast cancer, heart disease, colorectal cancer, diabetes, endometrial cancer, gallbladder disease, hypertension, liver disease, back pain, sleeping problems, and stroke–not to mention the tremendous emotional, relational, and social costs.  The data are clear: the overweight are the target of discrimination in education, healthcare, and employment.  A study by Brownell and Puhl (2003), for example, found that: (1) a significant percentage of healthcare professionals admit to feeling  “repulsed” by obese person, even among those who specialize in bariatric treatment; (2) parents provide less college support to their overweight compared to “thin” children; and (3) 87% of obese individuals reported that weight prevented them from being hired for a job.

Sadly, available evidence indicates that while weight problems are “among the easiest conditions to recognize,” they remain one of the “most difficult to treat.”  Weight loss programs abound.  When was the last time you watched television and didn’t see an ad for a diet pill, program, or exercise machine?  Many work.  Few, however, lead to lasting change.

More than a decade ago, I met Dr. Paul Faulkner, the founder and then Chief Executive Officer of Resources for Living (RFL), an innovative employee assistance program located in Austin, Texas.  I was teaching a week-long course on outcome-informed work at the Cape Cod Institute in Eastham, Massachusetts.  Paul had long searched for a way of improving outcomes and service delivery that could simultaneously be used to provide evidence of the value of treatment to purchasers–in the case of RFL, the large, multinational companies that were paying him to manage their employee assistance programs.  Thus began a long relationship between me and the management and clinical staff of RFL.  I was in Austin, Texas dozens of times providing training and consultation as well as setting up the original ORS/SRS feedback system known as ALERT, which is still in use at the organization today.  All of the original reliability, validity, norming, and response trajectories were done together with the crew at RFL.

Along the way, RFL expanded services to disease management, including depression, chronic obstructive pulmonary disease, diabetes, and obesity.  The “weight management” program delivered coaching and nutritional consultation via the telephone informed by ongoing measurement of outcomes and the therapeutic alliance using the SRS and ORS.  The results are impressive.  The study by Ryan Sorrell, a clinician and researcher at RFL, not only found that the program and feedback led to weight loss, but also significant improvements in distress, health eating behaviors (70%), exercise (65%), and presenteeism on the job (64%)–the latter being critical to the employers paying for the service.

Such research adds to the growing body of literature documenting the importance of “practice-based” evidence, making clear that finding the “right” or “evidence-based” approach for obesity (or any problem for that matter) is less important than finding out “what works” for each person in need of help.  With challenging, “life-style” problems, this means using ongoing feedback to inform whatever services may be deemed appropriate or necessary.  Doing so not only leads to better outcomes, but also provides real-time, real-world evidence of return on investment for those footing the bill.

This last week, Jeremy Laurance, Health Editor for the U.K. Independent published an article entitled, “The big question: Does cognitive therapy work? And should the NHS (National Health Service) provide more of it?” Usually such questions are limited to professional journals and trade magazines. Instead, it ran in the “Life and Style” section of one of Britain’s largest daily newspapers. Why?

In 2007, the government earmarked £173,000,000 (approximately 260,000,000 U.S. dollars) to train up an army of new therapists. Briefly, the money was allocated following an earlier report by Professor Richard Layard of the London School of Economics which found that a staggering 38% of illness and disability claims were accounted for by “mental disorders.” The sticking point—and part of the reason for the article by Laurance—is that training was largely limited to a single treatment approach: cognitive-behavioral therapy (CBT).  And research released this week indicates that the efficacy of the method has been seriously overestimated due to “publication bias.”
Researchers Cuijpers, Smith, Bohlmeijer, Hollon, and Andersson (2010) examined the “effect sizes” of 117 trials and found that the tendency of journals to accept trials that showed positive results and reject those with null or negative findings reduced the reported effectiveness of CBT by as much as 33 percent!
Combine such findings with evidence from multiple meta-analyses showing no difference in outcome between treatment approaches intended to be therapeutic and one has to wonder why CBT continues to enjoy a privileged position among policy makers and regulatory bodies.  Despite the evidence, the governmental body in the UK that is responsible for reviewing research and making policy recommendations—National Institute for Health and Clinical Excellence (NICE)–continues to advocate for CBT.  It’s not only unscientific, its bad policy. Alas, when it comes to treatment methods, CBT enjoys what British psychologist Richard Wiseman calls, the “get out of a null effect free” card.
What would work? If the issue is truly guaranteeing effective treatment, the answer is measurement and feedback.  The single largest contributor to outcome is who provides the treatment and not what treatment approach is employed.  More than a dozen randomized clinical trials—the design of choice of NICE and SAMSHA—indicate that outcomes and retention rates are improved while costs are decreased—in many cases dramatically so.
I respectfully ask, “What is the hold up?”