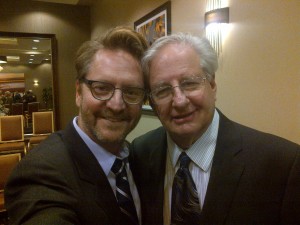 Imagine having the distinction of being voted one of the top 10 most influential psychotherapists of the 20th Century.

Psychologist Don Meichenbaum is that person.  In his spare time, together with Arron Beck and Marvin Goldfried, he created the most popular and researched method of psychotherapy in use today: cognitive-behavior therapy (CBT).

I got to know Don years ago as we shared a car ride, traveling to and from a training venue while teaching separate, week-long workshops in New England.  We laughed.  We talked.  We debated.  Fiercely.

We’ve been friends and colleagues ever since, recreating our car ride discussions in front of large audiences of therapists at each Evolution of Psychotherapy conference since 2005.

As Don approaches his 80th birthday, we look back on the development of CBT — what he thinks he got right and how his thinking has evolved over time.  Most trace the roots of CBT to various theorists in the field — Freud, Wolpe, and others.  Don is clear: his mother made him do it.  That’s right.  According to him, CBT got its start with Mrs. Meichenbaum.   I know you’ll be amused, but I also believe you’ll be surprised by why and how she contributed.

That said, my interview with Don isn’t merely a retrospective.  Still actively involved in the field, he shares important, evidence-based tips about trauma and resilience, applying the latest findings to the psychological and economic impacts of the coronavirus.  You’ll find the interview below.

All done for now,