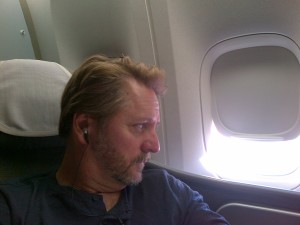 In June, I spent several days in the air traveling to and from Perth, Australia for a conference.  Too tired to read anymore, I turned on the video system and began watching a program from the Discovery Channel about the North American red fox.

The furry little creatures were shown hunting rodents hidden under three feet of snow.  Three feet!  Up in the air the foxes would hop, thrusting their noses deep into the drifts.  Most of the time, they came up with nothing.  That is, unless they were facing north.  Then the odds changed considerably.  Seventy-five percent of the time, the fox was guaranteed a meal.  Scientists believe the animal uses the planet’s magnetic field to more accurately calculate and plot it’s trajectory–the same principle as the GPS in your car.  Watch the video.  It’s incredible.

In a similar way, the odds of successful treatment increase considerably when clinicians incorporate feedback into their work.  Asking consumers to assess their progress and the quality of the therapeutic relationship is the “North Pole” of behavioral health services.  Available evidence documents that when providers ask for and accommodate such feedback, dropout and deterioration rates plummet, and effectiveness doubles.  Without it, the same body of evidence shows that likelihood of recovery for consumers is about 15-20%, roughly equivalent to foxes who hunt pointing in the wrong direction.

The process, known as Feedback-Informed Treatment (FIT), is being used around the globe to improve the quality and outcome of therapy.  It’s also listed on SAMHSA’s National Registry of Evidence-Based Programs and Practices.

I have a brand new DVD demonstrating how to introduce, administer, and deal effectively with the feedback consumers provide.  It was filmed live at the most recent Evolution of Psychotherapy Conference.  Thanks to the Erickson Foundation, for a limited time, you can get it here for 29.95 (that’s 50% off the regular price). 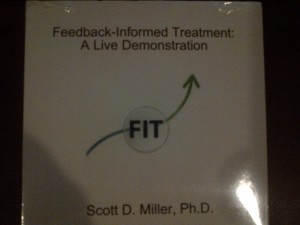 More information about FIT is available at: www.whatispcoms.com.  You can also access the free outcome and alliance tools there.  Gotta go.  I’m re-arranging my office furniture…