My family and I had a frightening experience this past Memorial Day.  While driving through Indiana on the way home to Chicago,

“Tornado warning in this area.”

Not a watch, mind you, a warning.  The difference is critical.  A watch means conditions are favorable for a tornado.  A warning means, IT’S HERE!

Looking ahead, we could see the dark, fast moving clouds.  No rotation, but menacing nonetheless.  That’s when our phones screeched the warning again.

Turning on the radio, we listened to the weather broadcast, distorted by the now abundant flashes of lightening.  We quickly learned we were heading directly into the affected area.

“What do we do?” I muttered to myself.   Cars and trucks were already pulling to the side, taking up positions under overpasses.  A few had become stuck while attempting to turn around in the already flooded ditch separating the two directions.

“Check Google maps to see where we can get off,” I barked.  I knew from prior experience that sheltering under overpasses was a bad idea.   We had to get off or risk having the Tornado hit us head on.  Problem was we were on the tollway where exits are few and far between.

“Two miles to the next exit,” my son soon replied.

That’s when we first saw it.  The clouds rotating overhead, a conical shape beginning to push downward.

Once more, our phones alerted: Take shelter now.  With my adrenaline pumping, and no other way to go but forward, I pushed on the accelerator.

Thankfully, we made it to the exit, racing northward up a country road at 85 miles-an-hour to escape the storm.  Ten or twelve minutes later, we spied a small gas station and pulled into the lot.  It was pouring rain, alternating with hail.  The sense of relief was palpable nonetheless.

Once the danger had passed, we resumed our journey.  The cabin of the car now quiet, I began running the experience over and over in my mind.  Something about it really bugged me, in particular the warnings and advice we’d received via our mobile phones and from the media.  It was clear, to be sure.  At the same time, it was absolutely unhelpful.  Yes, we were grateful for the warning.  And, of course, it was a good idea to seek shelter.  But where and how?  Absent more concrete direction, the result was people either panicked (like us) or made poor, even dangerous choices (e.g., sheltering under overpasses instead of laying in a ditch).

We have a similar problem in the field of mental health.  Google “advice and psychotherapy” and you get roughly 6 million hits many, if not most, of which are negative.  “The best advice a therapist could get,” one prominent site counsels, is “Stop giving advice.”  Another warns, telling people how to solve their problems, is “counterproductive” and potentially unethical.  A variety of reasons are given — largely having to do with the assumed nature of therapy (i.e., helping people help themselves) or client resistance to such help.

But do clients agree with such sentiments?  Until recently, no one had bothered to ask. 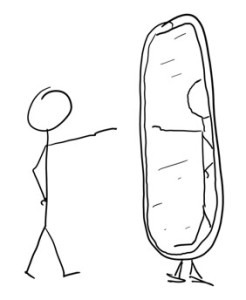 Now, a newly published study provides some provocative answers.  Researchers Cooper, Norcross, Raymond-Barker, and Hogan surveyed therapists and clients about their preferences, finding large and robust differences between the two groups.  Therapists, on average, preferred more emotional intensity and less directiveness.  Their clients?  The reverse!   The researcher’s advise to practitioners?  One page one of the peer reviewed article: Stop projecting your own desires onto the people you treat.

“Easier said than done” says lead author, Professor Mick Cooper.  I had the chance to speak with him about the study.  The interview provides direction for putting these importance findings into practice.