You know psychotherapy works. Forty years of research evidence backs up your faith in the process. And yet, fewer and fewer people are seeking out the services of professionals. Between 1998 and 2007, psychotherapy use decreased by 35%. People still sought help, they just went elsewhere to get it. For instance, use of psychotropic drugs is up 40% over the last decade.

A recent article in Popular Science traced the decline and outlined 3 provocative steps for saving the field. If you provide psychotherapy, it’s worth a read. The article is dead serious when recommending:

2. Getting a cute commercial; and

You’ve got to admit that the field’s fascination with biology is curious. A mountain of evidence points instead to the relationship between the provider and recipient of care. Other research shows that psychotherapy promotes more lasting change, at less cost and with fewer side effects than medication.

How to get the message out?

Frankly though, the best commercial for psychotherapy is our results. Consider the approach taken by the Colorado Center for Clinical Excellence. They don’t merely cite studies supporting psychotherapy in general, they report their actual results!

You can begin doing the same by downloading two free, simple to use measures here.

Then, learn how to use the scales to determine your effectiveness at an upcoming Feedback Informed Treatment Intensive (FIT) training.

There, you’ll also learn how to use the data to improve both the quality and outcome of your services. That’s why the Substance Abuse and Mental Health Services Administration (SAMHSA) recently listed FIT on the National Registry of Evidence Based Programs and Practices!

So, now is the time GO BIG by joining us. The next training is coming up in March! Register now at: http://ai2014.eventbrite.ie/. 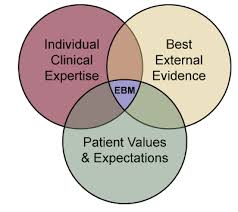 Back in November, I blogged about the ICCE application to SAMSHA’s National Registry for consideration of FIT as an official evidence-based approach (EBP).  Given the definition of EBP by the Institute of Medicine and the American Psychological Association, Feedback Informed Treatment seems a perfect, well, FIT.  According to the IOM and APA, evidence-based practice means using the best evidence and tailoring services to the client, their preferences, culture, and circumstances.  Additionally, when evidence-based, clinicians must monitor “patient progress (and of changes in the patient’s circumstances—e.g.,job loss, major illness) that may suggest the need to adjust the treatment. If progress is not proceeding adequately, the psychologist alters or addresses problematic aspects of the treatment (e.g., problems in the therapeutic relationship or in the implementation of the goals of the treatment) as appropriate.”

In late Summer 2011, ICCE submitted 1000’s of pages of supporting documents, research studies, as well as video in support of the application.  This week, we heard that FIT passed the “Quality of Research” phase of the review.  Now, the committee is looking at the “Readiness for Dissemination” materials, including the six detailed treatment and implementation manuals on feedback informed treatment.  Keep your fingers crossed.  We’ve been told that the entire process should be completed sometime in late fall.

In the meantime, we are preparing for this summer’s Advanced Intensive and Training of Trainer workshops.  Once again, clinicians, educators, and researchers from around the world will be coming together for cutting edge training.  Only a few spots remain, so register now.


Look at this picture.  This man needs help.  He is psychologist, Alan Kazdin, former president of the American Psychological Association, and current Professor of Psychology at Yale University.  A little over a week ago, to the surprise and shock of many in the field, he disclosed a problem in his professional life.  In an interview that appeared online at TimeHealthland Dr. Kazdin reported being unable to find a therapist or treatment program to which he could refer clients–even in Manhattan, New York, the nation’s largest city!

After traveling the length and breadth of the United States for the last decade, and meeting and working with hundreds of agencies and tens of thousands of therapists, I know there are many clinicians that can help Dr. Kazdin with his problem.  Our group has been tracking the outcome of numerous practitioners over the last decade and found average outcomes to be on par with those obtained in tightly controlled randomized clinical trails!  That’s good news for Dr. Kazdin.

Now, just to be sure, it should be pointed out that Dr. Kazdin is asking for practitioners who adhere to the Cochrane Review’s and the American Psychological Association’s definition of evidence-based practice (EBP)–or, I should say, I believe that is what he is asking for as the interview is not entirely clear on this point and appears to imply that EBP is about using specific treatment methods (the most popular, of course, being CBT).  The actual definition contains three main points, and clearly states that EBP is the integration of:

Interestingly, the official APA policy on evidence-based practice further defines clinical expertise as the “monitoring of patient progress (and of changes in the patient’s circumstances)…that may suggest the need to adjust the treatment.  If progress is not proceeding adequately, the psychologist alters or addresses problematic aspects of the treatment (e.g., problems in the therapeutic relationship or in the implementation of the goals of the treatment) as appropriate.”

I say “interestingly” for two reasons.  First, the definition of EBP clearly indicates that clinicians must tailor psychotherapy to the individual client.  And yet, the interview with Dr. Kazdin specifically quotes him as saying, “That’s a red herring. The research shows that no one knows how to do that. [And they don’t know how to monitor your progress].”   Now, admittedly, the research is new and, as Dr. Kazdin says, “Most people practicing who are 50 years or older”–like himself–may not know about it, but there are over a dozen randomized clinical trials documenting how routinely monitoring progress and the relationship and adjusting accordingly improves outcome.  The interview also reports him saying that “there is no real evidence” that the relationship (aka alliance) between the therapist and client matters when, in fact, the APA Interdivisional Task Force on Evidence-Based Therapy Relationships concluded that there is abundant evidence that “the therapy relationship accounts for substantial and consistent contributions to…outcome….at least as much as the particular method.”  (Incidently, the complete APA policy statement on EBP can be found in the May-June 2006 issue of the American Psychologist).

Who knows how these two major bloopers managed to slip through the editing process?  I sure know I’d be embarrased and immediately issue a clarification if I’d been misquoted making statements so clearly at odds with the facts.  Perhaps Dr. Kazdin is still busy looking for someone to whom he can refer clients.  If you are a professional who uses your clinical expertise to tailor the application of scientifically sound psychotherapy practices to client preferences, values, and culture, then you can help.