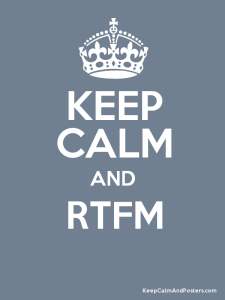 Not being a computer nerd, I’d never come across these expressions.  My 14-year-old son was the first person I heard use the terms.  He was referring to a problem I was having with my desktop computer.  To be sure, I’m no Luddite.  Still, “computer” will always be a second language for me.

With a restart and few clicks of the mouse, he resolved my issue.  When I asked him to explain what had caused the problem–hoping either to avoid or be able to resolve a similar occurrences in the future–he quipped, “Dad, it’s an RTFM problem, most likely in the PEBKAC.”

“RTFM problem?  In the PEBKAC?”

“Yeah,” he said with a laugh, then walked away.

Consulting Google, I quickly learned what the terms meant: Read the F%$&ing Manual as the Problem Exists Between the Keyboard and the Computer.  Swallowing my pride (and a fair bit of irritation), I had to admit my son was right.  I had not read the manual.  I didn’t want to read the manual.  I WANTED MY PROBLEM SOLVED!  As a result, I’d spent an increasingly frustrating hour, first tinkering, then on the phone with less than helpful customer service representative.

So, what’s this got to with psychotherapy?

Over the weekend, the twittersphere lit up with posts about a story in the New York Times: Effectiveness of Talk Therapy is Overstated.  The article reported on a new study which had found that psychotherapy was “25% less effective…than previously thought.”

The response to the story was swift, questioning, for the most part, motives and methodology:

The reaction is understandable.  The headline and story are enough to give any practicing therapist pause.  More so because, as I reviewed in my recent presentation at the Evolution of Psychotherapy conference, they are already working in an challenging practice environment.  Ru

les and regulation are on the increase.  Incomes are on the decline.  They know the value of the work they do.  They can see it in the people they treat.  Instead of recognizing the value of the services offered, the effectiveness of the field, it’s methods, and practitioners are called into question.

The interaction with my son still fresh in my mind, I wondered, “Could this be a RTFM problem located in PEBKAC?”

Said another way, “Had anyone actually read the study?!”  Despite assurances that “the facts are always friendly” from the likes of Carl Rogers, we know therapists don’t read research, for example.  How do we know?  RESEARCH!

In truth, the study is a merely an empirical call for more openness and transparency in publication of psychotherapy research.  Inflated estimates of effectiveness help no one.  Not practitioners.  Not clients.  Not the field.

The very same factors that lead the media to highlight the most attention-grabbing aspects of a news story, influence what gets submitted, reviewed, and published in scholarly journals.  Sad, but true.  To get the full picture–to determine “what really works”–results from all research–whether published or not–must be tracked and reported.  Not surprisingly, when you get beyond the headlines, the story is almost always less dramatic and more nuanced.

Additionally, the research article contains some real gems!  For example:

And while we’re on the subject, this week another study was published.  Click on the link and give it a read.  I’m sure there will be no headline in the New York Times, despite the fact that it’s the largest psychotherapy outcome study in history!   What are the results?  RTFM!

PS: Registration is open for the ICCE March Intensives: