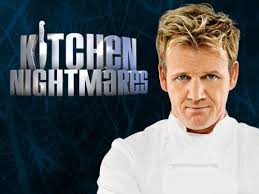 I have a guilty confession to make.  I really like Kitchen Nightmares.  Even though the show finished its run six L O N G years ago, I still watch it in re-runs.  The concept was simple.  Send one of the world’s best known chefs to save a failing restaurant.

Each week a new  establishment was featured.  A fair number were dives — dirty, disorganized messes with all the charm and quality of a gas station lavatory.  It wasn’t hard to figure out why these spots were in trouble.  Others, by contrast, were beautiful, high-end eateries whose difficulties were not immediately obvious.

Of course, I have no idea how much of what we viewers saw was real versus contrived.  Regardless, the answers owners gave whenever Ramsey asked for their assessment of the restaurant never failed to surprise and amuse.   I don’t recall a single episode where the owners readily acknowledged having any problems, other than the lack of customers!  In fact, most often they defended themselves, typically rating their fare “above average,” — a 7 or higher on a scale from 1 to 10.

Contrast the attitude of these restaurateurs with pop music icon Billy Joel.  When journalist Steve Croft asked him why he 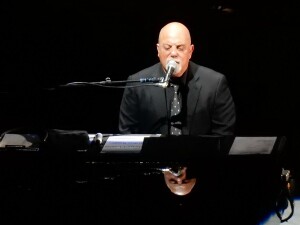 thought he’d been so successful, Joel at first balked, eventually answering, “Well, I have a theory, and it may sound a little like false humility, but … I actually just feel that I’m competent.”  Whether or not you are a fan of Joel’s sound, you have to admit the statement is remarkable.   He is one of the most successful music artists in modern history, inducted into the Rock and Roll Hall of Fame, winning a Grammy Legend Award, earning four number one albums on the Billboard 200, and consistently filling stadiums of adoring fans despite not having released a new album since 1993!  And yet, unlike those featured on Kitchen Nightmares, he sees himself as merely competent, adding “when .. you live in an age where there’s a lot of incompetence, it makes you appear extraordinary.”

Is humility associated with success?  Well, turns out, it is a quality possessed by highly effective effective therapists.  Studies not only confirm “professional self-doubt” is a strong predictor of both alliance and outcome in psychotherapy but actually a prerequisite for acquiring therapeutic expertise (1, 2).  To be clear, I’m not talking about debilitating diffidence or, as is popular in some therapeutic circles, knowingly adopting a “not-knowing” stance.  As researchers Hook, Watkins, Davis, and Owen describe, its about feedback — specifically, “valuing input from the other (or client) … and [a] willingness to engage in self-scrutiny.”

Low humility, research shows, is associated with compromised openness (3).  Sound familiar?  It is the most common reaction of owners featured on Kitchen Nightmares.  Season 5 contained two back-to-back episodes featuring Galleria 33, an Italian restaurant in Boston, Massachusetts.  As is typical, the show starts out with management expressing bewilderment about their failing business.  According to them, they’ve tried everything — redecorating, changing the menu, lowering prices.  Nothing has worked.  To the viewer, the problem is instantly obvious: they don’t take kindly to feedback.  When one customer complains their meal is “a little cold,” one of the owners becomes enraged.  She first argues with Ramsey, who agrees with the customer’s assessment, and then storms over to the table to confront the diner.  Under the guise of “just being curious and trying to understand,” she berates and humiliates them.  It’s positively cringeworthy.  After numerous similar complaints from other customers — and repeated, uncharacteristically calm, corrective feedback from Ramsey — the owner experiences a moment of uncertainty.  Looking directly into the camera she asks, “Am I in denial?”  The thought is quickly dismissed.  The real problem, she and the co-owner decide, is … (wait for it) …

Ramsey and their customers!   Is anyone surprised the restaurant didn’t survive?

Such dramatic examples aside, few therapists would dispute the importance of feedback in psychotherapy.  How do I know?  I’ve meet thousands over the last two decades as I traveled the world teaching about feedback-informed treatment (FIT).  Research on implementation indicates a far bigger challenge is making sense of the feedback one receives (4, 5, 6)  Yes, we can (and should) speak with the client — research shows therapists do that about 60% of the time when they receive negative feedback.  However, like an unhappy diner in an episode of Kitchen Nightmares, they may not know exactly what to do to fix the problem.  That’s where outside support and consultation can be critical.  Distressingly, research shows, even when clients are deteriorating, therapists consult with others (e.g., supervisors, colleagues, expert coaches) only 7% of time.

Since late summer, my colleagues and I at the International Center for Clinical Excellence have offered a series of intimate, virtual gatherings of mental health professionals.  Known as the FIT Cafe, the small group (10 max) gets together once a week to finesse their FIT-related skills and process client feedback.  It’s a combination of support, sharing, tips, strategizing, and individual consultation.  As frequent participant, psychologist Claire Wilde observes, “it has provided critical support for using the ORS and SRS to improve my therapeutic effectiveness with tricky cases, while also learning ways to use collected data to target areas for professional growth.” 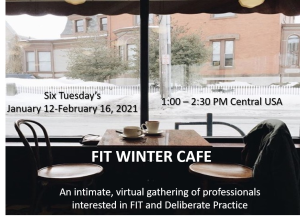 The next series is fast approaching, a combination of veterans and newbies from the US, Canada, Europe, Scandinavia, and Australia.  Learn more or register by clicking here or on the icon to the right.

Not ready for such an “up close and personal” experience?  Please join the ICCE online discussion forum.  It’s free.  You can connect with knowledgeable and considerate colleagues working to implement FIT and deliberate practice in their clinical practice in diverse settings around the world.