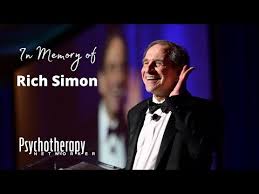 It’s rarely good news when the phone rings in the wee hours of the morning.  This time, it was a colleague calling to let me know that Rich Simon — the founder and editor of the Psychotherapy Networker and long time friend — had died.

To say the news came as a shock would be a gross understatement.  In the early 1990’s, I sent an unsolicited article to magazine for consideration.  Rich called me saying he liked the piece and wanted, with some minor revisions, to publish it.  After that, we began talking regularly by phone.  Sometimes the calls were brief.  Others went on for several hours spread out over days and weeks.

How best to describe Rich?  He was insatiably and infectiously curious, always hunting for whatever might improve the reach and effectiveness of psychotherapy.  I can hear his warm, distinct voice in my head right now, “Hey buddy,” he always started our conversations, quickly cutting to, “So, what you working on?”  And then, he’d listen, intently, following up with questions and a gentle challenge or two.  Throughout, it was clear Rich cared — about ideas, the field, people, and me.  I always left our conversations feeling as though I mattered, that I was contributing something vital and important to the field.  In the days since his death, I’ve learned I was not unique.  In fact, everyone I’ve spoken with said they had the same experience.  As one put it, “Rich had this uncanny ability to make you feel like you were his favorite.”

Our last conversation took place just a few weeks ago.  He called to thank me and my co-authors, Mark Hubble and Birgit Valla, for the article we’d written for the latest issue of the magazine.  None of us could imagine then what we would be experiencing now when we titled the piece, “Braving the Unknown.”  At this moment, I don’t have the words to describe what life will be like without him, without his dedication to, and genius in, bringing together the best ideas about the helping profession in one place.

If you never had a chance to meet Rich, or simply want to relive a few moments of his charm and wit, watch the memorial video below.  Should you want to add your own reflections or experiences, a special page has been set up on Facebook.

Wishing you peace, health, and safety,

Here is a smattering of the articles I wrote for Rich over the last 30 years:

Braving the Unknown: The Search for New Solutions (September/October 2020)

Meet You in McGinnis Meadows (January/February 2020)

How Psychotherapy Lost its Magic: Healing in the Age of Science (March/April 2017)

Supershrinks: Learning from the field’s most effective practitioners (November/December, 2007)

Exposing the Mythmakers: How the soft sell has replaced hard science (2000)