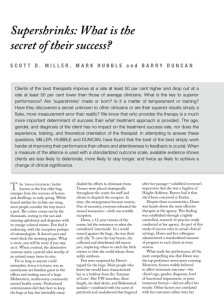 In 2007, my colleagues and I published an article entitled, Supershrinks: What’s the Secret of their Success?  In it, we reported on the status of our then decade long effort to understand why some psychotherapists were consistently more effective than others.  Although the phenomenon had first been reported in the mid-1970’s by psychologist David F. Ricks, accounting for the superior effectiveness of these clinicians had eluded scholarly explanation.  Our objective was as simple: figure out what the best were doing so that the rest of us could copy it and improve our results.

After many false starts and empirical dead ends, it turned out the key was “the best of the best simply work harder at improving their performance than others do” (p. 30).  Known in the expert and expertise literature as “deliberate practice,” their efforts to improve were not merely about putting in hours, but rather spending time reaching for performance objectives just beyond their level of proficiency.  Decades of research had documented the impact of deliberate practice across a wide range of human endeavors including sports, music, surgery, teaching, computer programming, and chess.  Surprisingly, despite this extensive evidence base, until the publication of our article, the term, much less the empirically-based process, had never appeared in any study or publication about psychotherapy.

Four years passed before the next publication on the subject appeared.  In The Road to Mastery, we

provided an update about our research, focusing this time on the important role environment played in successful deliberate practice.  In a number of practical applications around the world, we’d discovered that, without a supportive community, the majority failed to sustain their efforts.  Turns out, deliberate practice is hard.  In the article, we described the type of, and even places where, clinicians could get the backing they needed to persevere.

In 2015, we published the very first empirical research in a peer reviewed journal on the role of deliberate practice in psychotherapy.  During the six long years the study was being conducted, we had no idea whether our earlier work would be confirmed or discredited.  Needless to say, we were pleased and relieved when the analysis of the data revealed the most effective practitioners devoted 2.5 times more hours to deliberate practice than clinicians with average outcomes.  Further analysis showed factors long thought to influence the therapist effectiveness were shown to contribute nothing, including years of experience, gender, age, professional discipline, caseload, and theoretical orientation.

By this point, many other projects were underway.

The results have challenged many long held beliefs.  More importantly, however, they’ve provided the first concrete evidence of a pathway for accomplishing what had long eluded the field — reliably improving the outcomes of individual therapists.

Taking each in order, here’s what we’ve found:

For those interested in the details, click here.  Complete the form (just your name and email) and I’ll send you the eight studies referenced above!  I’ll also put you on a list to be notified when our new book, Better Results: Using Deliberate Practice to Improve Therapeutic Effectiveness, is released from the American Psychological Association.  It not only summarizes the research, but lays out in step-by-step fashion how to apply the findings in your professional development efforts.