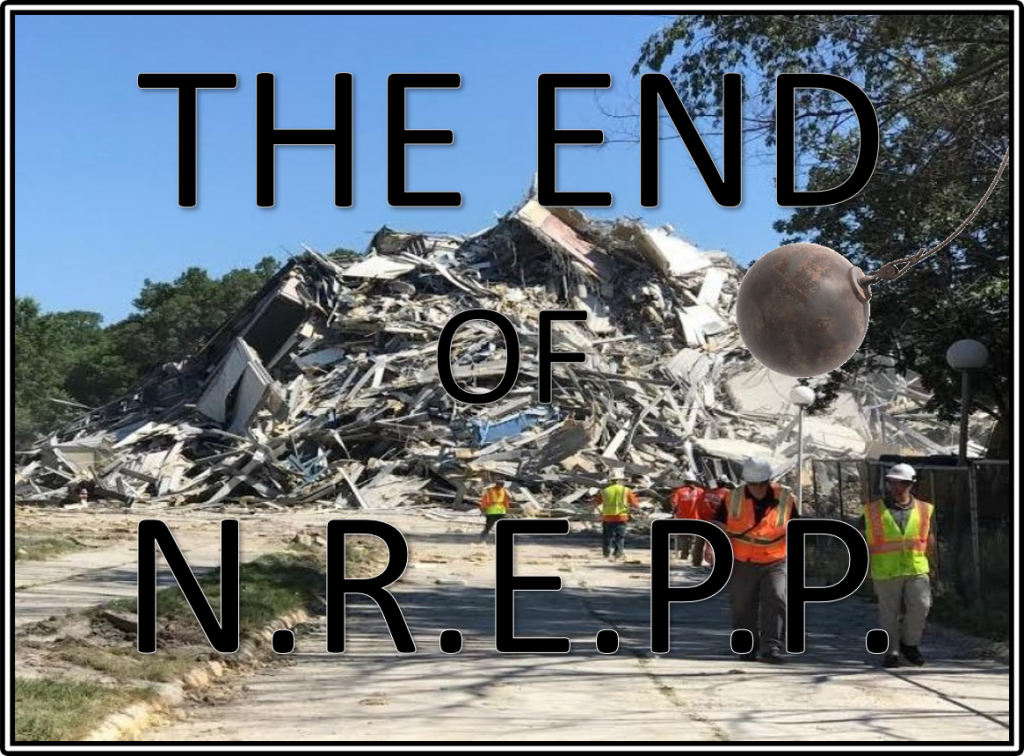 While you were celebrating the Holidays–shopping and spending time with family–government officials were busy at work.  On December 28th, the Substance Abuse and Mental Health Services (SAMHSA) sent a formal termination notice to the National Registry of Evidence-based Programs and Practices (NREPP).

Briefly, NREPP is “an evidence-based repository and review system designed to provide the public with reliable information on mental health and substance use interventions.”  In plain English, it’s a government website listing treatment approaches that have scientific support.  SAMHSA is the Federal Agency overseeing behavior health policy.

Back in November, I’d responded to a request from NREPP to update research on the Outcome and Session Rating Scales, two routine outcome measures currently listed on the registry website site.  All’s well until January 4th, when I received a short email stating that “no further review activities will occur” because the program was being ended “for the convenience of the government.”

Like much that comes from our Nation’s capitol, the reason given for the actions taken depends entirely on who you ask.  Democrats are blaming Trump.   Republicans, and the new SAMHSA director, blame the system, calling the registry not only flawed, but potentially dangerous.   As is typical nowadays, everyone is outraged!

As someone whose work was vetted by NREPP, I can personally vouch for the thoroughness of the process and the integrity of the reviewers.  No favors were sought and none were given.  More, while no one knows exactly what will happen in the future, I sincerely believe officials leading the change have the best of intentions.  What I am much less certain of is whether science will finally prevail in communicating “what works” in mental health and substance abuse to the public.

Bottom line: psychological approaches for alleviating human suffering are remarkably effective–on par or better than most medical treatments.  That said, NONE work like a medicine.

You have a bacterial infection, antibiotics are the solution.  A virus?  Well, you are just going to have to tough it out.  Take an aspirin and get some rest–and no, the brand you choose doesn’t really matter.   Ask a friend or relative, and they likely have a favorite.  The truth is, however, it doesn’t matter which one you take: Bayer, Econtin, Bufferin, Alka-Selzter, Anacin, a hundred other names, they’re all the same!

Four decades of research shows psychotherapy works much more like aspirin than an antibiotic.  Despite claims, its effects are not targeted nor specific to particular diagnoses.  Ask a friend, relative, your therapist or workshop presenter, and they all have their favorite: CBT, IPT, DBT, PD, TFT, CRT, EMDR, four-hundred additional names.  And yet, meta-analytic studies of head-to-head comparisons find no meaningful difference in outcome between approaches.

What does all this mean for the future of NREPP and SAMHSA?  The evidence makes clear that, when it comes to psychotherapy, any “list” of socially sanctioned approaches is not only unscientific, but seriously misleading.  Would it be too much to hope that future governmental efforts stop offering a marketplace for manufacturers of different brands of aspirin and focus instead on fostering evidence-based practice (EBP)?

Really, it’s not a bridge too far.

It merely means putting policies in place that help practitioners and agencies live up to the values inherent in the definition of EBP accepted by all professional organizations and regulatory bodies; namely, “the integration of the best available research with with clinical expertise in the context of patient characteristics, culture, and preferences” (pp. 273, APA, 2006).

P.S.: Every other year, the ICCE sponsors the “Training of Trainers” intensive.  Over three days, we focus on helping you become a world class presenter and trainer.  Join me, and colleagues from around the world for this transformational event.